HBF is representing its members in discussions with Government regarding building remediation costs. HBF is fully committed to the principle that leaseholders should not have to pay for necessary remediation costs arising from the design or construction of buildings they live in and is actively working with Government as part of its ongoing investigation into the issue and discussions with other relevant industry groups.

In addition to the correspondence between HBF and Government found on this page, HBF has engaged constructively in a series of meetings with officials as well as participated in a number ministerial round tables over recent weeks to help move towards a mutually acceptable solution.

On 7 March 2022, Housing Secretary Michael Gove responded to HBF’s letter of 25 February. In the letter, he emphasised his gratitude for the work HBF and members have done so far to develop proposals to resolve the building safety crisis. However, Gove also said the proposal fell short of “full and unconditional self remediation” and that he expects developers to make public commitments. Gove asked that the industry continues to work with DLUHC officials to develop proposals further and that if an agreement is not reached by the end of March, the government will impose a solution in law.

On 11 February 2022, Richard Goodman at DLUHC wrote to the Residential Property Developer industry, thanking them for their work so far in the government’s data collection exercise and confirmed that aggregate data would be shared via HBF. The letter also reiterated the government’s intention to publicly acknowledge those developers that have expressed a willingness to commit to the government’s asks, and requested that those who wish to do so should respond to DLUHC by 16 February, confirming a commitment to remediate and pay for buildings which they had a role in developing and which have been, or may be, identified as being defective.

Richard Goodman, Director General - Safer and Greener Buildings at DLUHC, has written to residential property developers on the government approach to agreement on building safety.

In the letter, he expressed his gratitude for the returns that have been submitted so far and urged those who have not yet done so to submit before February 7th. He also asked for developers to start creating a fuller return with all 11m+ buildings that have been developed so that the government can match these against their database of buildings that need remediation where they do not have developer information. As part of this process the government will share information on relevant buildings within existing funding programmes to agree how developers can take responsibility. Details on individual buildings will be shared with companies.

Goodman stated that the government will be taking steps to codify the commitments that developers will be asked to make, centred on the two fundamental propositions of the government’s approach, as the Secretary of State set out at his first roundtable. First, developers must commit to remediating those buildings which they themselves played a role in developing or refurbishing. Second, they must provide financial contributions towards a fund which will cover the costs of all other 11-18m buildings with critical life cladding safety defects. The letter also included a key features document which sets out a proposal for codifying these commitments.

The government are open to discussions on how best to develop these commitments, and welcome developers views as they develop the mechanics of the scheme further. They particularly welcome views on:

Goodman expressed that the government are keen to publicly acknowledge in mid-February the commitments developers and product manufacturers have made to undertake remediation of any building they have played a part in developing. As part of that announcement, the government would also like to reassure leaseholders that those developers who sign up to the arrangements and who are themselves the freeholder will not initiate forfeiture proceedings against leaseholders with respect to charges or costs associated with carrying out remediation works.

The letter can be read in full here.

10th January 2022: Letter from the DLUHC Secretary of State to the residential property developer industry

On 10 January 2022, Housing Secretary, Michael Gove announced a ‘reset’ to the Government’s approach to building safety, confirming that his Department would seek to ‘make developers… pay to fix the cladding crisis’.

The position represented a change of tack from the announcement in February 2021 of a leaseholder loan scheme for residents in buildings of between 11 metres and 18 metres that would have seen homeowners pay remediation bills with support from Government loans. Buildings above 18 metres are eligible for funding via the Government’s Building Safety Fund.

In a letter to home builders, the Secretary of State demanded ‘a new deal with industry’ that would require builders to:

1) Agree to make financial contributions to a dedicated fund to cover the full outstanding cladding remediation costs on 11-18m buildings which the government currently estimates to be £4bn;

2) Fund and undertake all necessary remediation of buildings over 11m (11-18m and 18m+) which each builder played a role in developing; and

3) Provide comprehensive information on all buildings over 11m which have historic fire safety defects and which builders had played a part in constructing over the past 30 years.

In a statement to Parliament, Mr Gove stated that he expected a public commitment to these asks by early March with financial commitments being brought forward by developers with profits of more than £10 million per year

26th April 2022: letter to Secretary of State - from Stewart Baseley

22nd March 2022: letter to Secretary of State - from Stewart Baseley

11th March 2022: letter to Secretary of State - from Stewart Baseley

In response to the Housing Secretary’s letter to HBF on 7 March seeking a ‘fully funded’ solution from UK home builders to the building safety crisis, HBF responded to set out the current barriers and seeking from government an insight into the data it holds on remediation requirements. HBF also confirmed that the results of its own data collection will be shared shortly.

Along with the British Property Federation and the Housing Forum, HBF wrote to the DLUHC Director-General highlighting the challenges of establishing a proportionate approach to building safety and encouraging Government to bring interested parties together to reach a solution.

25th February 2022: letter to Secretary of State - from Stewart Baseley

On 25 February 2022, HBF wrote to the Secretary of State setting out the industry’s response to government’s proposals on building safety works. The letter outlines a commitment to resolve fire safety concerns on all buildings over 11m, to remediate buildings dating back to 2000 and to withdraw from the Building Safety Fund. We also committed to continuing a constructive approach with the government and the other relevant bodies on remaining matters. The proposal is dependent on a public commitment from Government that it will make no further call on our members in respect of these issues.

On 16 February 2022, HBF responded to DLUHC’s letter of 11 February outlining the industry’s general response. HBF stated that the industry’s priority remains that buildings are made safe and that leaseholders are not bearing the costs but that some concerns remain, due to an ongoing lack of data and that some works are being identified beyond what is necessary to make buildings safe. HBF also reiterated the intention to write to the government with a more complete response by 25 February.

On 9 February, HBF responded to the 3 February letter from DLUHC, re-stating a commitment to work constructively with government and respond more substantively to the points raised in DLUHC’s letter by 25 February. HBF’s response highlighted the work undertaken by members to assist the Department and stressed the continued need for government to improve its understanding of scale of remediation required across the country.

4th February 2022: HBF issued the following statement in response to the Government publishing the open letter through the media

A spokesman for the Home Builders Federation said;.

“Throughout this process so far the industry has engaged constructively with Government to find solutions and remove the burden of costs to remediate buildings from leaseholders. It is clear from today’s open letter that government is not taking the same approach. UK home builders, responsible for only a minority of the affected buildings, have already spent or committed around £1bn to remediate buildings and the new Residential Developers Tax and Building Safety Levy will raise billions more from these companies. The latest proposal, an open-ended and variable annual tax on UK home builders at a rate decided by a government department each year, under the threat of being unable to operate in the UK, is clearly not proportionate. We are considering our position on the legality of the proposals, which target only UK home builders who are already working on their buildings and not the plethora of foreign companies and investment vehicles responsible for a large proportion of the remaining buildings that require remediation. We continue to call on Government to ensure materials providers, including overseas companies that manufactured and sold the materials that have created the problems, are part of the solution. As the Grenfell Inquiry is shortly to consider, Government also needs to recognise the failings of its Building Regulations regime on which the industry has relied. We will continue to discuss the matter with Government in a reasonable and rational way and hope that will be reciprocated.”

On 18 January, on behalf of the industry, HBF responded to the Housing Secretary’s letter committing to working with Government to share information and engaging with officials and ministers to help find solutions to the Government’s challenges but reminded of the commitments made to date by its members, through existing liabilities, voluntary contributions to leaseholders and building owners and now via the tax regime as well. We do not believe that the full costs of a regulatory and product orientated failure should be borne entirely by UK home builders simply because they are easy to levy with taxes and are uniquely reliant on state bureaucracies via the planning process.

11th January 2022: HBF issued the following statement in response to the Government publishing the open letter through the media.

A spokesman for the Home Builders Federation said

“Leaseholders should not have to pay for remediation of buildings and the previously proposed loan scheme has proved to be impractical.

However, the most urgent action remains for government to define guidance and work with lenders, insurers, surveyors and the construction industry to understand what remediation work actually needs to be done to resolve issues for residents quickly and simply.

Whilst house builders are committed to playing their part, there are many other organisations involved in the construction of affected buildings, including housing associations and local authorities.

Specifications for buildings would have been in accordance with Building Regulations set by Government at the time of construction. As well as developers and government, other parties should be involved in remediation costs, not least material manufacturers who designed, tested and sold materials that developers purchased in good faith that were later proved to not be fit for purpose. “

29th January 2021: HBF letter to Lord Greenhalgh re an offer to work with govt on supporting leaseholders 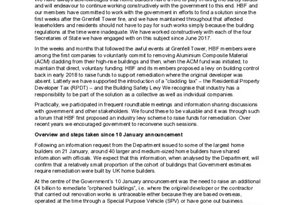 Government takes amendments to Building Safety Bill through the Lords