Despite the current political focus on Britain’s departure from the European Union, housing remains at the top of the domestic policy agenda. This was reflected in the UK Government’s 2017 Budget pledge to address the ‘biggest domestic policy challenge of our generation’ by setting the ambitious but achievable target of delivering 300,000 homes a year by the mid-2020s.

This briefing is intended to provide you with examples of recent industry activities, the latest statistics from the home building industry, key industry challenges and information regarding current HBF policy work and campaigns.

We hope you find it useful but if you have any questions or would like to discuss the opportunities and challenges facing the homebuilding sector in more detail, please contact:

Further information can also be found on our website www.hbf.co.uk.

This spring, HBF launched its Mental Health Awareness Campaign in conjunction with the Lighthouse Club, a charity dedicated to providing financial and emotional support to the construction community and their families.

Poor mental health is a significant problem in the construction industry and the statistics make for sobering reading:

In light of these startling statistics, HBF and its members are taking collective action through a new campaign to raise awareness and tackle the stigma surrounding mental health.

By signing up to the Campaign, developers are committing to look at how they can adopt and implement the Building Mental Health Framework within their businesses. This may involve introducing a helpline, delivering a toolbox talk on the subject or training staff members to become Mental Health First aiders, for example.

So far, over 40 home builders have signed up to support the campaign and £100,000 has been raised for the Lighthouse Club. Over the coming months, we expect to build on this success so that we can ensure as many workers as possible know where to turn should they need help. 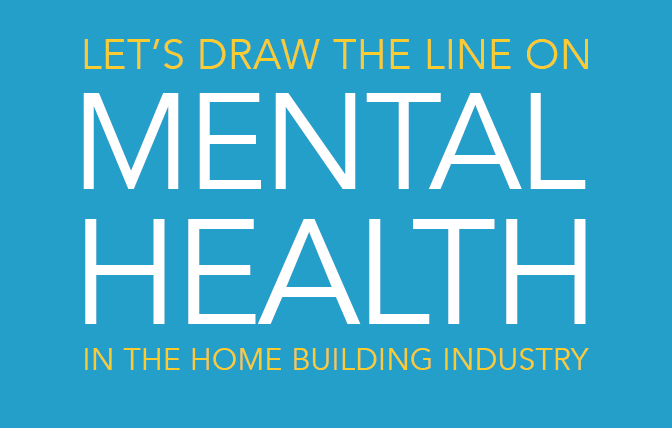 While the importance of the home building industry in addressing issues concerning housing supply is well-documented, its role as a key driver of economic growth, both nationally and locally, and as a supporter of sustainable communities, is increasingly, but not yet fully, recognised.

Therefore, in 2018 the Home Builders Federation (HBF) commissioned planning consultancy Lichfields to produce The Economic Footprint of House Building report which examines how the industry contributes to society covering areas such as statutory obligations, negotiations with councils, and social community schemes.

To highlight the way these effects are distributed on a more regional level, HBF has produced a series of regional reports using the most recent government housing net supply numbers. At present, reports have been published looking at the benefits of housebuilding that are being delivered in

Analysis covering the remaining areas of England and Wales will be published throughout the year and will be available here.  The reports demonstrate that housing is undoubtedly beneficial not just to the wider economic health of the country, but also to local communities and small businesses.

As housing supply continues to ramp up, we anticipate even greater social and economic benefits to be felt in communities around the country. 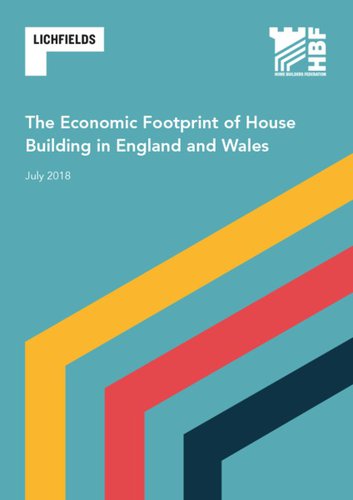 The Survey was launched over a decade ago to provide a barometer for both industry and individual builders to gauge performance and drive improvements. It is a self-completion census of new home purchasers and is one of the most comprehensive, large-sale surveys of its type carried out in the country with almost 100,000 forms sent and 61,000 questionnaire forms completed and returned last year.

We are now seeing evidence of the major investment by house builders in build quality and customer care. As a result, we welcomed the publication of last year’s scores that saw a reversal of the trend across all question areas including a 2% improvement in the key ‘recommend’ questions referenced above.

This year’s further improvement is a clear demonstration that the intense focus within the industry on build quality and customer service is continuing to deliver. Crucially, the improvements in satisfaction levels have been achieved as output has continued to increase. The past five years have seen an unprecedented 78% increase in housing supply, and the industry recognises that high levels of build quality and service must be maintained as volumes rise and are investing accordingly.

However, in instances where things do go wrong, the industry fully accepts that there is a responsibility on the builder to put things right to the satisfaction of the customer, and that there needs to be strong protections in place to ensure they abide by their responsibilities.

As such, since the publication of the APPG on Excellence in the Built Environment’s ‘More homes fewer complaints’ report in the Summer of 2016, HBF has been considering each of the 10 recommendations made and developing workstreams to address them. This has included developing guidance on the information builders provide to customers; working with a legal firm to create a standard industry sales contract; and having Ipsos Mori undertake a thorough review of the National New Homes Survey. Probably the most significant work, however, has been to consider how a New homes Ombudsman could be introduced that both drives up build quality and delivers improved consumer redress. The industry has been working closely with Government officials, warranty providers, lenders, existing code bodies and other stakeholders on three main workstreams which we anticipate will form the basis of a new industry code and is totally committed to helping facilitate the introduction of a New Homes Ombudsman.

We are confident that the work we are doing can help further improve the quality of homes and the level of customer service new build home buyers receive, whilst strengthening consumer redress in those regrettable instances when things do go wrong. HBF would welcome the opportunity to discuss with you our work in this area in more detail. 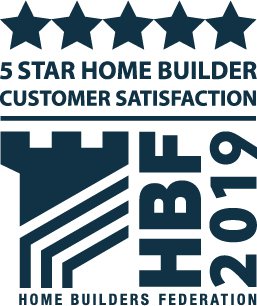 A lot of the discussion on barriers to home ownership has focused on the issues of ‘supply’ and ‘affordability’. The home building sector is committed to helping buyers overcome these barriers by driving forward the supply of housing, tackling problems of affordability and reversing declining rates of home ownership. Considerable progress has been made in recent years:

However, with the government giving industry an ambitious new target of delivering 300,000 new homes per annum by the mid-2020s, it is evident more still needs to be done. The home building industry is responding to this challenge by planning for further growth; permissions for 361,971 new homes were granted in the year to October, underlining the industry’s intent to build even more homes in the years ahead. 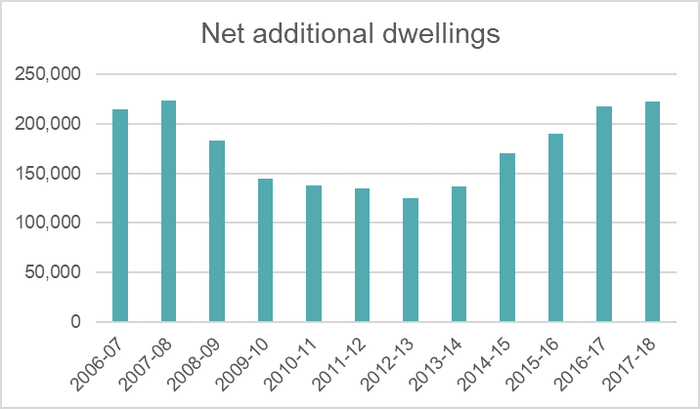 The Help to Buy Equity Loan Scheme is proving a vital driver in reversing recent declines in home ownership levels amongst young people.

Since the start of the Scheme in April 2013, 195,219 properties have been purchased using Help to Buy.

Some critics of the scheme claim that its presence drives up new build house prices. However, since the scheme’s introduction, new build prices have continued to track the wider market. In the period December 2012 to December 2017, the average new build price increased by 38.1% compared with 35.6% amongst existing properties.

Given the success of the scheme, HBF welcomed the Government’s announcement at Budget 2018 of a new Help to Buy Scheme for FTBs running from 2021-23.

If you would like information on how the current scheme is helping FTBs in your constituency, please don’t hesitate to get in touch. 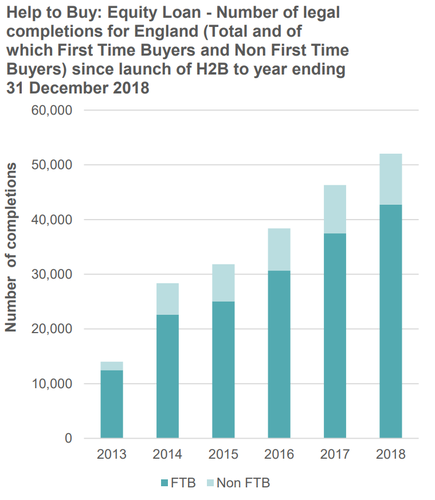 The substantial increases in housing supply seen in recent years has meant that the private homebuilding industry is playing a vital role in delivering affordable housing.

A report commissioned by MHCLG and published in 2017 showed that a growing proportion of the land value captured on new residential development sites through Community Infrastructure Levy (CIL) and Section 106 (S106) contributions is being directed towards affordable housing (around two-thirds of the £6bn raised in 2016/17).

Of the £4bn in affordable housing contributions generated through the development of private sector housing in 2016/17, around one-quarter was directed to social rented housing meaning that other than some small-scale contributions from the public sector, private landowners and developers are by some way the biggest providers of this in-demand tenure of housing.

In terms of direct provision, 47% of all affordable housing completions in 2017/18 were derived from Section 106 contributions, up from 42% the year before, illustrating the increasing reliance on the private sector in delivering new affordable homes. In fact, 60% of homes built for social rent last year were funded through Section 106 contributions.

Overall, an additional 47,355 affordable homes were delivered in England in 2017-18 with delivery 12% higher than the previous year.

Planning permissions are a strong indicator of future housing supply. HBF/Glenigan’s latest Housing Pipeline report, published in April 2019, showed that while planning permissions granted for residential units in 2018 were down on the record highs seen during 2017, they are still continuing to be granted at high levels. In total, 369,417 permissions were granted for residential units in England last year, compared to 371,878 in 2017.

This demonstrates the huge investment being made by house builders as they build on recent increases in housing supply to deliver even more new homes. 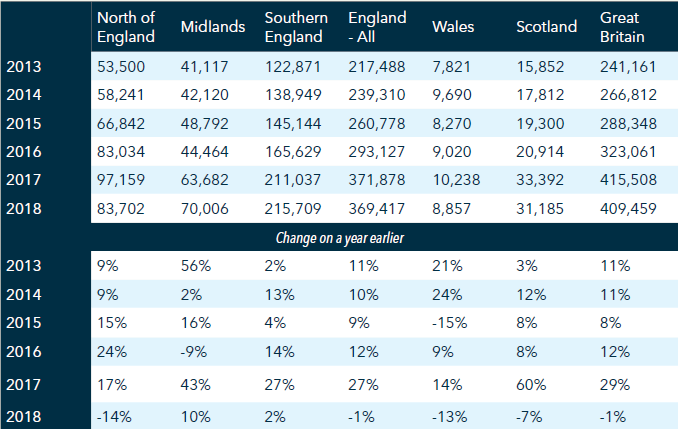