16,703 jobs supported by industry in the region

A new report released today, based on research carried out by Lichfields for the Home Builders Federation (HBF), shows the huge contribution house building is making to the economy in the West of England[1]. Over 5,000 new homes were provided in the region over the last year, generating just short of £1bn to the local economy.

The report shows that in 2017/18, house building was responsible for:

The report also underlines the impact the Government’s Help to Buy scheme is having in the region. Over 4,000 properties have been purchased using the scheme across the West of England since its launch in 2012, with 85% of those purchases coming from first time buyers.

Since the scheme launch home building has increased by 82.9% in the West of England. Bath and North East Somerset delivered a 127% increase in housing over this period, followed by 90% in South Gloucestershire, 65% in Bristol and 59% in North Somerset respectively.

Over this five-year period, housebuilding in the West of England has generated £414.3m in economic activity and £29.4m extra tax.

Stewart Baseley, Executive Chairman at the Home Builders Federation, said; “For too long the vast social and economic benefits of house building have gone unnoticed in our communities. This research shows that the home building industry is delivering much more than bricks and mortar and providing a massive economic boost to the South West. Over the last five years, in the West of England alone, house building has given the economy a £414m shot in the arm and provided much-needed additional funding for local schools and community facilities.

“With the Government’s target to build 300,000 new homes every year until the mid-2020’s, the West of England should continue to see these benefits increase.” 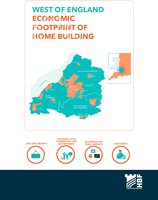