HBF welcomed the Barker Review of housing supply and provided a great deal of assistance and information to Barker's Review team. The final report, published in March 2004, identified the most important constraints on housing supply and offered a wide range of suggestions for improving housing delivery directed at the house building industry, the planning system, central and local government, regeneration bodies and registered social landlords.

The 36 recommendations in the final report, especially those targeted specifically at the house building industry, presented major challenges for the industry and HBF. HBF instituted a programme of consultation with Government, members and other stakeholders and initiated research projects on skills and modern methods of construction (MMC). A number of special member committees and working groups were formed to guide HBF's response to the Review, including an umbrella Barker Review Steering Committee, which included senior representatives from a number of house building companies, and a high-level PGS Working Group

The Government's full response to Barker in December 2005 produced a raft of consultations, policies and other measures.

In December 2005, the Government published a consultation document on a proposed Planning-gain Supplement (PGS), one of Barker’s recommendations. A set of three further consultations documents was released in December 2006. HBF made submissions to both the December 2005 and December 2006 consultations.  In July 2007, the Prime Minster announced that the PGS was the Government’s preferred option, but said implementation of the PGS would be delayed if industry could devise a better, workable alternative before the Pre-Budget Report in October 2007. HBF worked closely with members and with the commercial property sector to devise a workable alternative that would meet the Government’s objectives. A paper, prepared jointly by HBF, BPF, the Major Developers Group and London First, was submitted to HM Treasury and CLG on 2nd October proposing a local planning tariff to fund infrastructure. On 9th October the Government announced it was abandoning the proposed PGS and would instead introduce a .

An interim report of Barker’s second independent report into land-use planning was published in July 2006 , and her final report was released in December 2006. 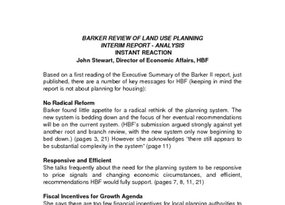